All Nature's wildness - a quote by John Muir 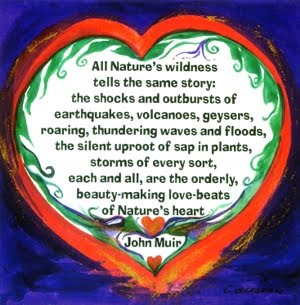 Thunderstorms in Florida seem louder than anywhere else I’ve lived. It’s like the sky is closer here – twenty feet up instead of twenty miles. I have no idea if that’s real or an illusion of sound. I’ll probably get used to all the racket the longer I live here. For now, I’m enjoying it and marveling, once again, at the power of Mother Nature.

I haven't experienced a Florida hurricane yet. I hear we have a few days warning for that, unlike an earthquake.

I've been in a major earthquake (Northridge, Jan. 17, 1994). A frightening experience, to say the least. The sound of glass breaking all around me, and the gushing water from the toilet that had been dislodged from the pipes - all the furniture on the floor, doors blocked. Oh my.

My house was not nearly as damaged as my daughter's. She was closer to the epicenter. Days and months of aftershocks continued that experience. Earthquakes (the little tremors that made the lights shake) had been kind of "fun" up until then. After that day, I gained a new respect for power of nature and forevermore, I take preparedness seriously.

One summer day in Minneapolis, Minnesota, a waterspout (mini-tornado) hit our beach blanket at Lake Calhoun and lifted my daughter and her friend up and deposited them down on the sand again about 30 feet away. That was the most direct hit I've had at the hands of Mother Nature. I watched it form across the lake and travel on the surface of the water on a path that looked like it was aiming right for us. It picked up a sailboat on the shore before touching down on our blanket. Sand was drilled into my scalp. The entire beach population fled like wild banshees running for our lives.

Ah, memories. John Muir's quote (above) captures Nature's majesty for me. Having lived in the SF Bay area for over eight years, I walked in the redwood forests of Muir Woods many times. It is a cathedral of a place where I always felt a communion with this man's spirit. John Muir founded The Sierra Club and was responsible for preserving large nature areas and western forests. He petitioned Congress for the National Parks Bill (which passed in 1899), establishing both Yosemite and Sequoia National Parks. Read more about John Muir here (including a visit with Ralph Waldo Emerson in 1871). I remain eternally grateful for his gift of preservation of our earthly wilderness lands as well as his expression of beauty, passion, and love in his writing.