Up until now, I've never actually listened to Lady Gaga's music. When I've seen clips of her performances on the news or at awards shows, I've mostly been fascinated by the amazing costumes, dramatic staging, the LOOK of everything - thinking how brave she must be to express herself like she does. Thus being so preoccupied, I completely missed her music.

Intrigued, and looking for something to read on a New Years Eve flight to Arizona, I found Lisa Robinson's article in Vanity Fair (Jan 2012), "In Lady Gaga's Wake" which I enjoyed very much. I came away with even more respect for this woman, and even more of a curiosity about what it takes for a person to be so brave, so free, and so strong to express herself so fully.

To live my life fully and express who I am is the very thing I've been efforting to do in my own life for decades. One of my transcendentalist heroes, Henry David Thoreau says, "If I am not I, who will be?" Not, who will I be, but who will be ME if I am not. It's this that has continuously pushed me to take another step into myself and pull out a greater expression of me. Time and time again. 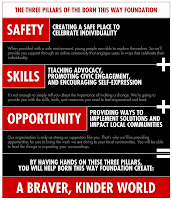 When another heroine of mine, Oprah Winfrey, interviewed Lady Gaga and her mother for the Oprah's Next Chapter show, which airs on OWN TV, I watched with eagerness to learn more. I was not disappointed.

The segment began with the launch of the Born This Way Foundation at Harvard. "Led by Lady Gaga and her mother Cynthia Germanotta, the Born This Way Foundation was founded in 2011 to foster a more accepting society, where differences are embraced and individuality is celebrated. The Foundation is dedicated to creating a safe community that helps connect young people with the skills and opportunities they need to build a kinder, braver world." Pillars of the Foundation appear to the right. Click on the image to see it on the foundation's website where they provide a link to download a printable copy for yourself and ways to get involved.

Throughout the two hours of Oprah's Next Chapter interview, I continued to be inspired with insight into the life and expression of the woman who is Lady Gaga. It is her desire to empower everyone she meets with the courage to be themselves and to know in their hearts they are not only OK, but phenomenal. Including me.

As much as I've grown, learned, and accomplished in my life, I sometimes feel it's too late for me to break through the barriers I still feel hold me back. I often wish that as a child I had had the tools to stand tall in who I am, the power to speak up for my beliefs, and the courage to plunge forward into the world to express the dreams of my heart. These are the very things Lady Gaga offers to us all. During the interview with Oprah, Lady Gaga's mother, Cynthia, read the beginning of a fan letter they'd received recently: "Dear Germanotta Family and Born This Way Foundation, I'm a 66 year old grandmother that dances around the kitchen to Stephanie's music ..." Maybe it's not too late for me, after all.

Fully appreciating Lady Gaga's beautiful spirit and gifts, I'll watch the interview again. Then I'll listen to her music, listening for more clues, and I'll bravely take one more step to express myself more fully in the world, to share my gifts in a bigger way, and to simply BE who I am.
-Raphaella Vaisseau
Posted by Raphaella Vaisseau at Monday, July 09, 2012 1 comment: