"Activism, GMOs, and the Law of Attraction" by Raphaella Vaisseau

I believe in choice and free will. However, as I've become aware of the introduction of GMOs (genetically modified organisms) into our food supply, I've learned from the Institute for Responsible Technology and other sources that "the FDA does not even require the labeling of GMOs in food ingredient lists." Thus, until GMO labeling is required, the choice to avoid GMOs is not an easy option for consumers in the US.

Making a difference matters to me, and contributing to the greater good is important to me, as it is to many people. Several years ago, Gregory M. Lamb wrote in the Christian Science Monitor: "Nearly nine in 10 [Americans] (85 percent) agree they can make the world a better place through their actions, 91 percent say it's important that individuals get involved in positive social change, and 77 percent say getting involved is personally important to them, according to a [2011] survey of more than 2,000 American adults conducted by Walden University, an online university, and Harris Interactive, a market research firm." 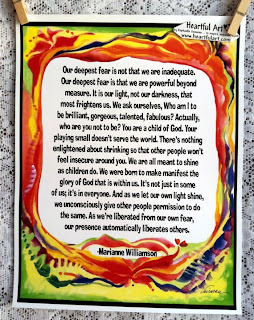 At the same time, I believe in the Law of Attraction, that where a person puts his or her attention will attract more of the same. So it would follow that fighting against something would make it stronger. How then can one navigate this universal law to effect change? How does activism mesh with the Law of Attraction. These are questions I've been pondering of late.

Much of my Heartful Art inspires people to stand tall, speak up, be brave, and walk the talk of whatever it is each person believes. Marianne Williamson's words from A Return to Love speak to the power we each have when we "let our own light shine."

Perhaps the key in this instance (instead of fighting against Monsanto and similar companies who have been creating genetically engineered food for over 20 years) is to focus on what I want more of, which is to have mandatory labeling of products containing genetically modified organisms in the US.

According to The Center for Food Safety, 64 countries around the world currently require labeling of genetically engineered food. I would like the US to be on that list. Labels offer consumers the choice to buy GE food or not. To join in this effort, or to learn more about this issue and "let Washington know that Americans want labeling of genetically engineered foods" explore Just Label It.
- Raphaella Vaisseau
Posted by Raphaella Vaisseau at Thursday, July 11, 2013