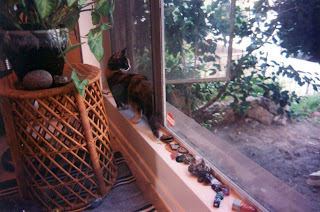 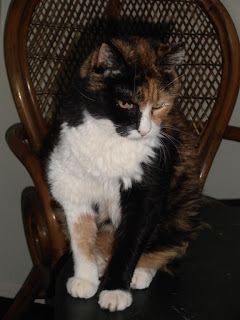 Apache joined me and Muffy, my other cat, in 1996 and we became a family of three. We lived in West Hollywood, California then. A year later, we drove up to Ashland, Oregon to begin my life as a full-time artist. They were the Heartful Art cats, and today is the end of an era. Muffy passed into Spirit during the closing ceremonies of the Beijing Olympics in 2008, shortly before moving to the Gulf Coast of Florida later that month. Apache passed from my arms into the Heart of God this afternoon. During the past 17 years, my cats and I moved dozens of times and through it all they were by my side and adapted to whatever came next. From Ashland we went to the San Francisco Bay Area. What loyal creatures they are. Big hearts. Faithful companions. Soft fur. Love in a purr. I will miss Apache most in the nighttime when she came close to be with me. I send my love and light for the highest good to both of my beloved felines, but at this time, especially to Apache who is free now in Spirit. Namaste.
- Raphaella Vaisseau