Great news via Marketwatch today!! Bernanke speaking at Brookings Institution: "Recession is over"

As a retailer myself, this is VERY good to hear. I'm going to visualize it constantly - health, wealth and happiness for one and all.
Posted by Raphaella Vaisseau at Tuesday, September 15, 2009 No comments:

New Video from Abraham-Hicks: The Vortex

Abraham - as translated by Esther Hicks - recently gave the definitive explanation of what they mean when they talk about alignment with Source Energy.

At the end of the workshop, after spending a long segment with a workshop participant who was struggling with circumstances that seemed overwhelming, Abraham gave perhaps the most passionate and amazing rampage they have ever given. The emotional reaction of the workshop attendees confirmed its power as a touchstone for anyone wanting to know when they are in, and when they are out of, their Vortex of Creation - where the only reality that serves us truly exists.

Recorded on June 20, 2009, at an Abraham-Hicks Law of Attraction Workshop in Boston, Massachusetts.
For nearly 25 years Esther & Jerry Hicks have produced books, audio recordings and videos based on the Teachings of Abraham, and their latest book, entitled "The Vortex, is currently on the New York Times bestseller list.

Esther explains that when she speaks for Abraham, she is interpreting blocks of thought from Non-Physical Source Energy - which she also sometimes identifies as her "Soul". Esther doesn't use the word "channeling" to describe her process, since she is not in a trance and is not hearing a voice in her head. Rather, she has trained herself to verbally interpret the same unerring Inner Guidance that is available to all of us.

For more information, please view our YouTube video entitled "Abraham Explains Who They Are", or go to http://www.abraham-hicks.com and listen to the audio entitled "Introduction to Abraham", and explore the wealth of other information available there.

Posted by Raphaella Vaisseau at Tuesday, September 15, 2009 No comments:

09-09-09 Activation of the Crystal Prism within - Siesta Key, Florida 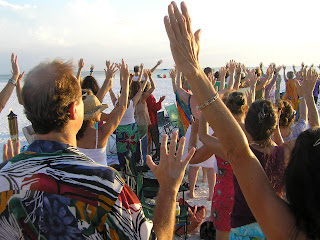 I joined many others in celebrating 09-09-09 on Siesta Key on Wednesday evening. I enjoyed feeling the soft white sands of the beach with my bare feet, hearing the sounds of flocks of birds continually flying overhead and seeing dragonflies flying among us while we participated in creating the crystal prism on the beach.

Organizers explained "the creation of a Prism in the sands of Siesta Key is but a physical representation of the creation and activation of the ethereal light prism within each of us. The main focus of this ceremony on 9.9.9 is that each of us feel, experience and witness the ethereal transformation into the crystal light beings that we are. The time is now for us to attune with that reality and to hold it with our purpose on this planet."

We met at the Sacred Tree on Siesta Key beach at 6:30pm to create the prism. The celebration ceremony began at 7:02pm. As the Prism of crystals was formed Diana Daffner warmed the atmosphere with her flute. Then it was blessed with sacred waters from around the world by Waterbearer Rose Lettiere. Shaman Mic McManus invoked the spirits and devas of the four directions. Rev. Zan Butterfly Deerwoman led a Crystal Solar Matrix meditation activating the crystal inside each one of us as healer Patricia Cockerill toned the crystal bowls.

Posted by Raphaella Vaisseau at Friday, September 11, 2009 No comments: